Group painting would allow the user to paint on layers Within a layer group by just selecting the layer group. The layer group should have its own lock, alpha-lock and alpha-inheritance buttons:

The ultimate purpose of this set-up is to eventually allow simultaneous multi-layer painting for 3D textures. This is basically a proposal on how to implement such a feature step-by-step (well, just the first step) while including features that may be (potentially) useful to 2D artists as well.

This is just a vague idea for now, and has not been approved yet.

This feature could be useful in the following scenarios:

Enhancements to the composition docker

Some users abuse layers, then can't find their layers back. With the right setup, they could potentially just click the group and paint. Artists may have a large number of sub-layers though, for shadows, highlights and others.

Enhancements to the composition docker would allow them to toggle between locking states so they know that they are painting on the right layer. The composition function could basically be made to remember visibility, lock, alpha-lock and alpha-inheritance states as well. For example, the user could have a composition that locks all but the shadow layers. They can then proceed to fix the shading for all groups. 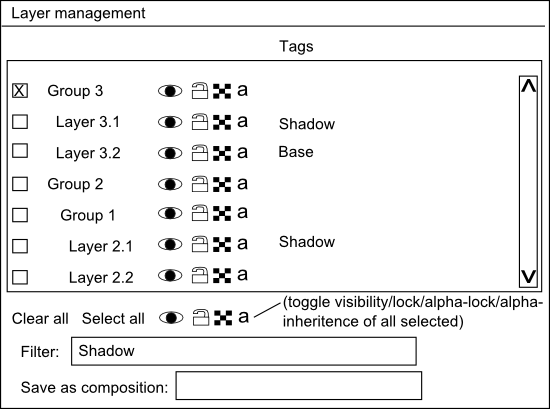 As explained by mifth, 3D textures are typically represented as one layer and several maps:

The first three are RGBA layers, while Normal is a depth layer. The painting is done directly on a 3D model.

Group painting could be a small first step to making 3D multi-layer painting a reality. A lot of work would still be needed, including:

I'm personally not familiar with 3D painting, so any person interested in implementing this would need to do more research on 3D UI.


This page was last edited on 2 April 2013, at 11:46. Content is available under Creative Commons License SA 4.0 unless otherwise noted.