The current dialog for filters configuration only display a small preview widget and do not benefit from the full size of the screen.

One solution is to take the current dialog, remove the preview widget and disable everything in Krita but the pan/zoom tools.

One possibility with horizontal dialog: 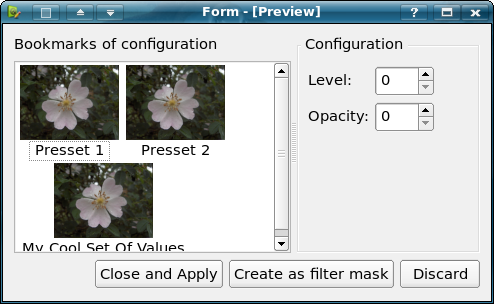 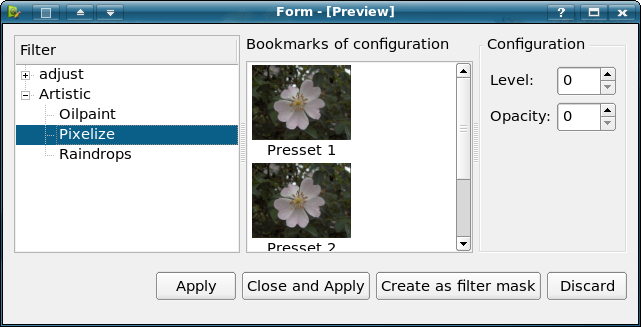 A vertical dialog has been mocked-up by Ronan Zeegers: 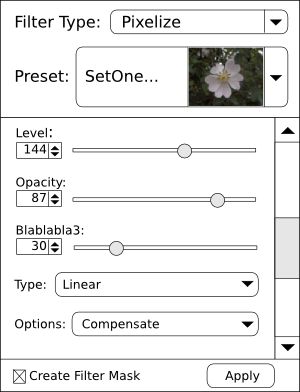 An other idea is to use a docker, it can be either vertical or horizontal.

The horizontal docker might have three columns, one with a list of filters and a preview organized in a tree to follow the filter menu hierarchy. The second column will contains a list of bookmarked configuration with a preview.

And last but not least, the third column will contains the configuration widget. 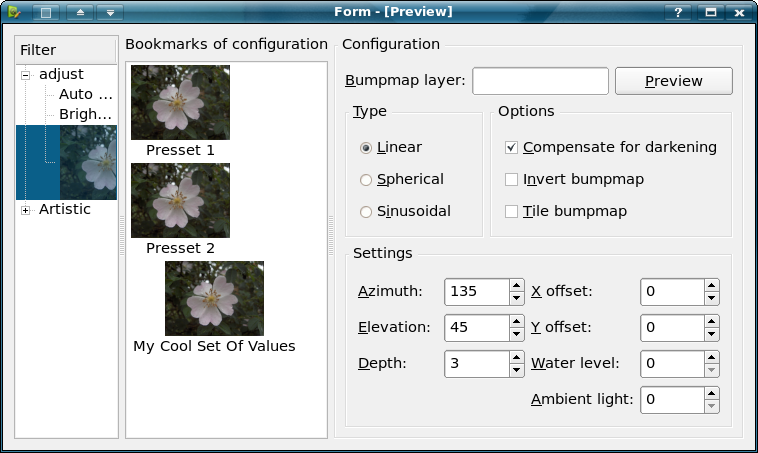 Last idea is to have a vertical docker with the only the configuration widget. The bookmarked configurations and the filter gallery could then appears as poppup button.

The vertical docker could appears and hide other dockers, the problem is that some other dockers are usefull like the overview docker or even the layerbox.

There are two issues:

This section is meant to present solutions that were try, and to list their problem (the goal is to avoid what we did in 1.x when trying different solution for the preview widget and then retrying older solution and then looping over solutions).

With this dialog, all the tools are available and all the docker, that means the user can play with the various parameters of the filter, and zooming / panning, layer visibility but also painting.

Only one dialog remains, meaning the user select a filter from the menu, and then it is seleced in the filter gallery, and all filters trigger the dialog (even those without configuration).

Launching the filter gallery will select the last filter and have the same layout that filter dialog selected from the menu.

The various buttons will do:


This page was last edited on 7 July 2010, at 17:36. Content is available under Creative Commons License SA 4.0 unless otherwise noted.