Tremor and wiggle for the freehand tool

Krita offers a variety of smoothing methods. What about the other way round? Two possibilities include the Tremor and Wiggle options in Inkscape:

Krita offers position jitters, however the resulting output is not continuous. In Inkscape, Tremor also affects the width of the calligraphic stroke, but Tremor in Krita could just affect the stroke position. Users could get additional effect with size and other jitters.

"finish stroke" for the freehand and dynamic drawing tools

This was first proposed by Animtim in Bug 312437 : Add a switch to activate "finish stroke" with weighted smoothing

I suggest having this feature for both the freehand and dynamic drawing tools. The options would be:

Also, instead of drawing a line straight to the cursor, the "finishing stroke" should follow the cursor path, progressively thinning until where the cursor was released. 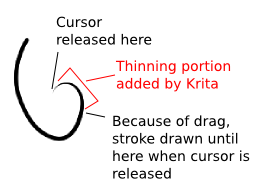 This will enable the users to draw smooth thinning lines in a controlled manner.

Map distance to path option for path and freehand path

Currently, you have to set an absolute distance in pixels for the Distance or Fade. What if you want to map the dynamic precisely onto the length of a drawn path, though? Hence, a "map to path length" option in the dynamics section. With this on:

There could also be an option to subdivide.

(it doesn't need to be just size being mapped, it can be anything)

Krita allows you to stroke any vector object with a brush. There are just a few issues:

Just because it's possible, it doesn't mean it's pleasant to do. What I like about Krita's interface philosophy is that it tries to help you focus on the drawing, not on the menus. You can draw rectangles in Gimp, too, but you need to go find "stroke selection" in the interface.

For this reason, I suggest we combine the best of both worlds through an extra mode: Edit mode. This creates a temporary ghost assistant (which is really just the corresponding vector shape), and allows you to stroke and automatically get rid of it when you're done. So how does this work?

For most drawing tools, you'll get two modes: 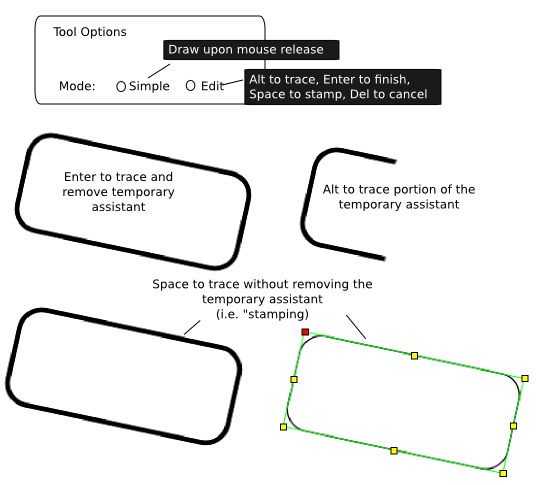 For example, you use the Rectangle tool. You draw out a rectangle, that you can now rotate, skew and make rounded corners (tab to toggle shape specific edit mode?). When you're happy, you can either:

It would also make using the path tool a lot easier. I have trouble getting used to drawing a path exactly like I want right now. This allows me to just go back and edit it like a vector object.

This should be useful for artists to more quickly place the elements for background objects and architecture, land and space vehicles, jewelry and steampunk designs, allowing them to focus on the designs, rather than on getting the lines right (especially arcs, ugh).

A few additional features could also be introduced: 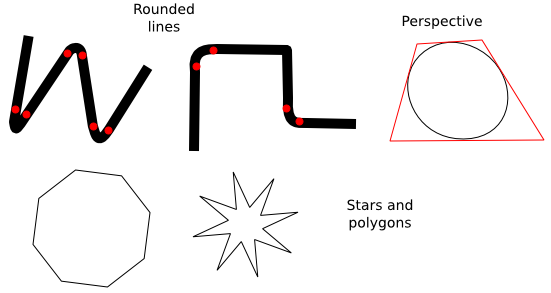 I like the way you can use the Ellipse tool to draw ellipses at any angle. Deevad even explained how you can draw circles in perspective correctly using this tool! Why can't we can't we have it as a drawing mode? More generally, I am hoping for the following extra drawing modes: 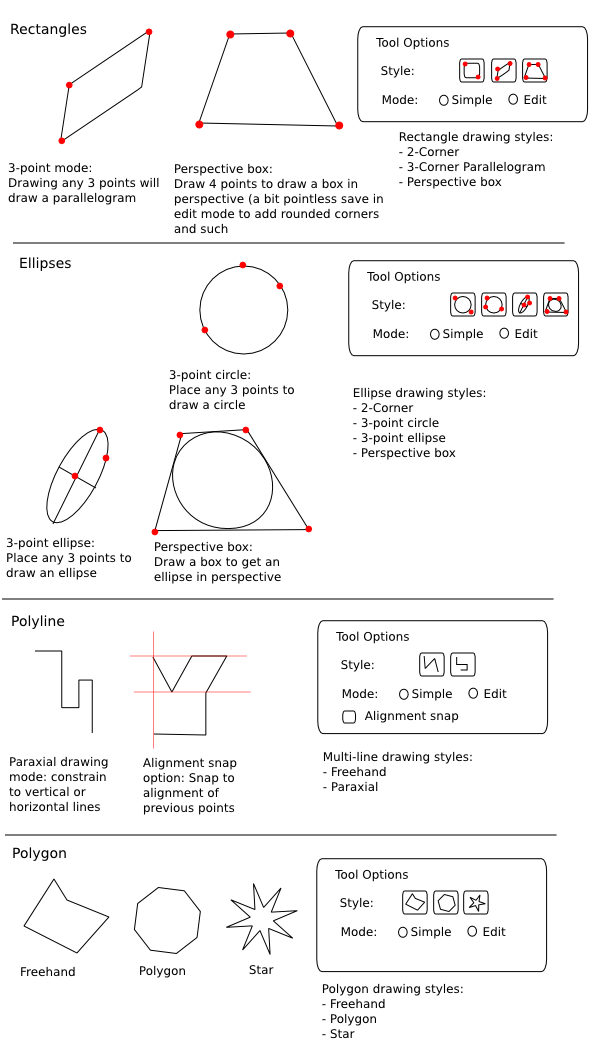 Notice that I proposed "perspective boxes" at several occasions. This feature could integrate with Deevad's perspective grid proposal, with the corners being drawn snapping as they approach the direction of the vanishing points. In my proposal for Edit mode, I suggest perspective capabilities there, too, but basically users will be able to choose the option that works best for them.

Other drawing tools that could be created

Spiral and Grid, basically. They're both a pain to draw manually.


This page was last edited on 19 March 2013, at 15:32. Content is available under Creative Commons License SA 4.0 unless otherwise noted.