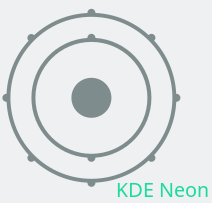 Neon provides an easy and elegant way for people to test the latest software from KDE as it's developed, or use the newest releases of KDE Software.

KDE is a community making the best in end-user-ready software, but it can be hard to install the latest versions. We rely upon Linux distribution companies and communities to compile, package, and make our software available. They do an excellent job. However their release schedules are not necessarily aligned with those of KDE project's, they don't provide packages from Git and often not from Betas, so there's no way to test the forthcoming releases. This results in packages that are late compared to KDE project's releases. Once a user has installed a distro, there is often no easy way to get updates of KDE software packages, such as a new release of Plasma, it typically involves adding an extra archive that the user needs to search out. Because of the competing demands of distributions, their third-party libraries and software are often a different version from that with which KDE software works best. And often they replace the project's branding, often adding their own branding to the software. This can drive away users, contributors, and donors who might be best served directly from KDE.

We'll use Ubuntu as a base for Neon. Ubuntu provides a stable release with 3 years of security updates and if necessary hardware backports, allowing Neon to concentrate on the rolling updates of KDE software we care about. Where KDE software needs a newer version of software that is available, it is likely available elsewhere for Ubuntu to be easily backported in the Neon archives. Increasingly the Ubuntu archives do not have the necessary version of a piece of software needed by KDE software, in which case we will add it to the Neon archives.

Neon will make available KDE software from latest stable releases, latest unstable releases and from Git. Our default selection of software will include a fully functional desktop set up using Plasma and other KDE software where there is a viable option from KDE.

this makes it useful for:

How do we select default software?

Choices of default software are based on the above use cases and the personas for KDE Plasma.

Software released by KDE should only depend on released versions of software it depends on. If this isn't the case it's a bug.

If KDE software depends on a newer version of software than is in the archives Neon uses we can backport as needed if practical.


This page was last edited on 27 January 2016, at 21:27. Content is available under Creative Commons License SA 4.0 unless otherwise noted.