From 2003 to 2012 the KDE PIM community used to meet at Osnabrück for its traditional new year meeting. Originating from a project to bring FOSS groupware to German public institutions, these meetings were instrumental in forming the KDE PIM community, shaped the development of Kontact, and acted as birthplace for famous and infamous technologies, such as Akonadi.

In 2021 we want to revive this tradition for a one-time get-together of former and current members of the KDE PIM community. As we can't meet in person we will do this as an online afternoon meeting: "Virtual Osnabrück".

The purpose of the meeting is to (re)connect the community, to meet old friends, and to talk past, current, and future KDE PIM. We will have time for mingling and chatting, but also will have a couple of short presentations.

This will be a fun meeting, reviving old bonds and creating new ones, a glimpse into how KDE PIM came to be and what it is today. Looking forward to see you in January. As Till once wrote in 2012: "Osnabrück is not a place :)."

Presentation round: KDE PIM at Osnabrück

Presentation round: KDE PIM today and in the future 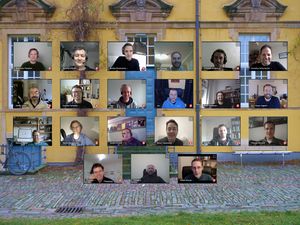 It happened. The Osnabrück crew reconvened, joined by some guests and new members of the community.

We started with virtual Dom-Hotel breakfast table breakout sessions, giving people the chance to reconnect in small groups. Dom-Hotel is the hotel, where the people traveling to Osnabrück for the KDE PIM New Year Meeting usually stayed. People caught up with what was happening and first ideas were spun.

Then we had the first of two presentation sessions, the first looking back to how Osnabrück came to be and what happened there between 2003 and 2012 when the KDE PIM community regularly met at Osnabrück. Bernhard showed some historical documents on how the meeting emerged from the work on adding encryption to free software email in the "Ägypten" projects and how this was followed by the bold idea of implementing a free software groupware based on proven scalable email technology. This was the birth of the adequately named project "Kroupware", which later resulted in development on Kontact and tools such as Kleopatra. We heard how this was all about the nose ;-)

The idea of KDE PIM as a sub community also was realized in Osnabrück. One of the results of the first meeting was the move of KMail from the kdenetwork module to the new kdepim module in, back than, CVS. It joined KOrganizer and KAddressbook there, and provided a natural home for Kontact, which integrated all the tools for a groupware client. The culture of Osnabrück was a shaping factor in moving this community forward, using the meetings as a place to talk to each other, not just for hacking and chatting on IRC, but for having the structured high-bandwidth conversations which are possible when meeting in person.

Till continued with the story of Akonadi. It was born in 2006 as the ambitious project to overcome the limitations of the architecture of KDE 3's PIM. The idea of separating caching, storing, and managing PIM data from the user interface in form of a server or daemon was floating around in several variants. With Akonadi as an implementation of this idea based on the proven protocols of IMAP for accessing data and D-Bus as a control channel this idea became reality. Till and Volker showed us screenshots from the first moments when it started to work and we saw data from the Akonadi server in KMail, and Cornelius hinted to the fact that we even had an tool to create Akonadi architecture diagrams. The goals of the project were lofty.

Did Akonadi fail? It's there until today, it's the base for the KDE PIM applications and more, and it's not going away anytime soon. People use it and enjoy it. But did it realize it's ambition? Probably not. We had a discussion about that. One conclusion was that the idea of the universal, scalable platform, where people just could put their application on in a simple way, didn't realize, and that this idea also was adding too much weight to use cases of single applications. We saw that with some applications which moved away from Akonadi and went for their own simple backends again. The effort to really develop, polish, and maintain such a platform in a stable way for a huge audience was more than what the KDE PIM community could sustain. Would more funding have helped? This sparked an interesting discussion which later was picked up when talking about the future of fat clients.

Thorsten talked about KTimeTracker, which represents the other side of the KDE PIM spectrum, not the big groupware solution, but the simple tool for a specific purpose, tracking time on projects. It has found a new maintainer with Alex nowadays. It's a testament to the frugality and health of a community if projects continue for many years and go from one hand to the other. 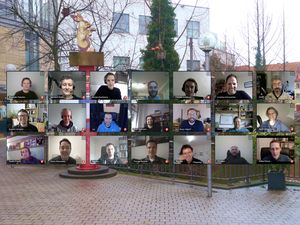 After a break which included the successful attempt to create a virtual Osnabrück group picture (you guessed it, we wrote a tool for that), we continued with the second presentation session looking at what is there today in KDE PIM and what is coming.

Bernhard gave an inspiring presentation about the value of the fat client. It gives users control, it gives scalability, it makes it possible to combine data without having to reveal it to cloud providers or other central instances. It meets real needs of users. KDE PIM always has been about providing this fat client experience in a great way. But we see that, although there is a need, it's hard to provide sustained funding for development of fat clients. The data-collecting and ad-based business models of cloud providers don't apply, and not everybody realizes the value that lies in being in control of your own data.

Still, there are quite some fat client projects, in KDE PIM itself, but also around it. Christian presented the state of Kube, an alternative groupware client, partly based on KDE PIM technology but also using its own concepts. It emerged from the Kolab project and is actively developed. It's not meant to cover all possible use cases, but provides a fresh look at how you think of groupware clients.

Volker finally gave a presentation about a new side branch of the KDE PIM community, KDE Itinerary and friends. This is about collecting, processing, and presenting transportation information and more in a beautiful and helpful way. As a highlight Volker showed train and hotel data from the historical Osnabrück events in the new shiny user interface. Started from extracting ticket and other travel information from emails this has developed in a bunch of new applications and frameworks to help with use cases such as navigating train stations, seeing availability of shared bikes, or reminding of what power plug adaptor you have to bring when you are traveling abroad. This also is based on KDE PIM technology but also reaches out into a new set of technologies and communities, beyond what we had expected back then at Osnabrück. In some way, it got its own life.

We ended the meeting with favorite beverages, and chatting and discussing. BigBlueButton proved to be a stable and supportive platform for the meeting and its aftermath. We augmented that with a KDE PIM themed Work Adventure room, where people assembled around the Akonadi lamp to discuss in a smaller group or at the KDE kitchen table for a chat between a few individuals. This was a nice way to remember, reconnect, and talk about what's up today.

Everybody interested in KDE PIM is welcome to participate. Special invitations to all those who have participated in previous Osnabrück meetings. To be able to plan ahead a bit, please add your name to the list below or contact Cornelius Schumacher, if you intend to participate. Spontaneous appearance is welcome as well, though :-)

We are looking for a couple of short (about 5-10 mins) presentations. Anything is welcome, from slides with a project update to you telling your favorite Osnabrück story, and everything inbetween and beyond.

Some topics for inspiration:

If you would like to contribute a short presentation, please reach out to Cornelius Schumacher <[email protected]> so we can coordinate the agenda. A title and one sentence of what it will be, are enough. If you are unsure or just have a vague idea, please don't hesitate to reach out as well, and we'll figure out how to put it together. Spontaneous contributions at the meeting will also be welcome, as time permits.


This page was last edited on 16 January 2021, at 12:05. Content is available under Creative Commons License SA 4.0 unless otherwise noted.