KDE is a friendly community which hosts hundreds of projects. Any project which follows the KDE manifesto and KDE Vision is welcome to join us.

The term "application" is used here to mean any project hosted in KDE Git and includes programming libraries and development tools but not typically infrastructure tools or projects with other end product outputs. 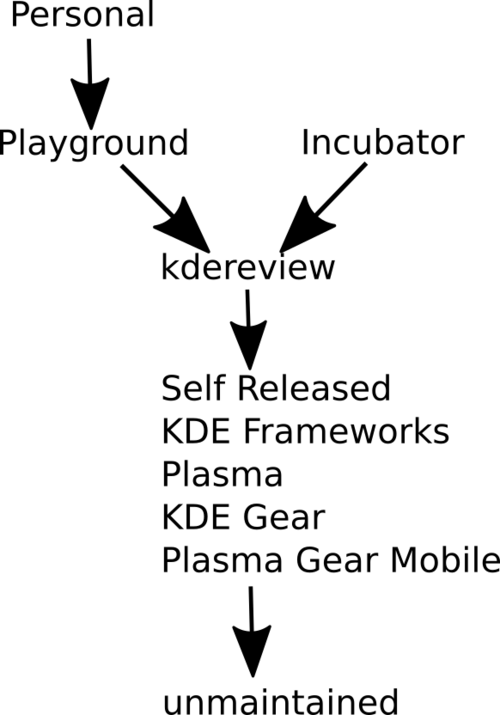 playground is a Git module for projects starting development

Projects which started life outside of KDE are welcome to join us if you feel our community makes a good fit through the KDE Incubator. A sponsor will guide you through the process and check your project complies with the needs of the KDE community

Projects move into kdereview when they are ready to start making beta or stable releases. It allows for the KDE community to check over for minimum standards. If you have any translations notify the kde-i18n-doc mailing list to move the translations.

Your project is now active and can make beta or stable releases. Find the best home for your project based on contents and release process wanted.

If a project is no longer useful you can move it to unmaintained. It can move here from any stage in the lifecycle.

Consider suggesting to KDE Gardening team to maintain it if there are still valid use cases.

You can move your project in repo-metadata, see repo-metadata README or file a Sysadmin ticket asking for the move

Projects can move back to playground if they are picked up for maintenance again.

All projects with user-visible strings must have translations.

Whenever moving projects between Git modules or when you make a new stable branch you must tell kde-i18n-doc mailing list to update the translation branches.


This page was last edited on 9 April 2021, at 13:50. Content is available under Creative Commons License SA 4.0 unless otherwise noted.