In Krita, performing boolean operations on vector shapes leads to a large number of unnecessary nodes. This happens because Qt lacks a proper algorithm to find the intersection point of two Bezier curves. I plan on implementing a numerically stable as well as efficient algorithm to find the intersections of two Bezier curves. Then I will implement a clipping algorithm required for carrying out the boolean operations. 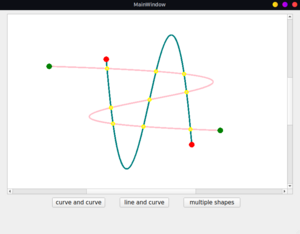 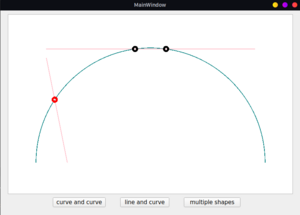 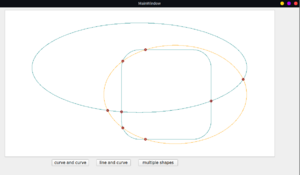 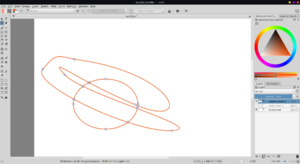 Clipping and the following selection of edges proved to be a challenging task. Most of the problems arose as a suitable implementation was not available online, at least in FOSS. Most of them relied on flattening of the curves, much like Qt's algorithm. The wiki page mentioned Greiner-Hormann algorithm as one possibility for handling clipping for shapes with curves. However, there was no implementation available online. There were also several degenerate cases in Greiner-Hormann. It would fail if the two shapes had common vertices. It will also fail for common/overlapping edges, and for points of intersection lying on the vertices. The solution suggested was to change the co-ordinates of such problematic points. However this might lead to unexpected and undesired results. There is an improved version of the algorithm explained in this paper, but the preprocessing routines were complicated and still had a few drawbacks. If there were a point of intersection coinciding with a point of self-intersection, the shape should be divided into several smaller non-intersecting shapes. Another major issue was that we needed to know at least one vertex of one shape lying outside the other shape. This is implemented in Qt, but works only for lines. (Currently, this can be implemented by using the tight bounding box function, and using an even-odd approach instead of Qt's winding-number approach.)


Apart from this, there was always an uncertainty as it had not been done before. There could be several problems there which remain unknown till it is implemented. For this reason, I chose not to continue with that approach. However, I am writing down everything that has been done, what remains to be done, and how to do it should one choose to follow this approach.

For the latter approaches, the algorithm to split the shapes is crucial. Basically, until now, all of the intersection points between the two shapes can be found. The next task would be to process these shapes and select the edges which should be there in the final shape. Here, the splitting comes in play. We split all the elements of the shape about all of the intersection points. Thus, we get a shape which contains all of the segments in such a way that they need not be split again. Essentially, the final shape will consist of curves and lines exactly as in the splitted shapes, as they can't be split any further. This is half of the clipping job done; we have successfully marked the intersections and have generated a structure to readily traverse. The only job remaining is to choose which segments (lines or curves) should make it to the final shape.


This process makes it feasible to use Qt's algorithm for clipping it. Qt flattens the curves to process it, but preserves the end points. Since all of the intersection points are converted to end-points, they will remain as they are, without any loss in accuracy. This also makes it possible for us to resubstitute the curves after we flatten them, to obtain the original curves. Also, this covers two out of three steps required for Greiner-Hormann: finding all points of intersection and then processing the vertices while marking them correctly. After finding out at least one point lying outside the other shape, the only thing remaining is to select the segments to be added to the final shape.


My second approach was to carry out the process by modifying Qt's original algorithm. The basic idea is to mark the segments while flattening the curves, and then to restore the curves again when the WingedEdge structure is converted back to QPainterPath. The code is implemented. However, I was not able to fully finish it. The original code was complex, and was largely undocumented. I have implemented the marking and substitution process. However, there seems to be a bug introduced which causes the shapes to be improperly clipped. the fault mostly lies in the functions QWingedEdge::doClip and QWingedEdge::handleCrossingEdges. Debugging messages reveal the splitted edges are received correctly by doClip, but it decides not to select them. It could also lie in the `traverse` function, as it decides upto which edge should be considered. However, I was not able to debug it properly, due to limited time at hand. Given some more time, I'm pretty sure I'll be able to get it to work. However, I have documented Qt's code to the best of my capacity, and I hope it will quicken the process of understanding it's algorithm. The algorithm needs some time to be understood, and once understood, it can be corrected easily. Due to the time constraint, I stopped debugging it, and went to the third - and current - approach; to explicitly substitute the curves.


The final and current approach is to carry out the substitution routine outside Qt's clipping algorithm. After finding all points of intersection, we process the shapes to convert all points of intersection to regular vertices (in the function KisIntersectionFinder::processShapes.) Then we record all the clipped curves with the help of the class CubicBezierData. Then, we clip the paths by Qt's own algorithm, without modifying it. Then, we traverse the final QPainterPath, and find the segments which are supposed to represent the flattened curve. As discussed above, the end points remain the same before and after flattening. Thus, we can find out a chain of continuous line segments (or lineTo elements) and if the end points of this chain match the end-points of one of the curves we have recorded, we replace the chain with the curve. This algorithm is the one being currently employed. It works for the union, intersection, subtraction operations for most of the cases.

I have not implemented the algorithm of selecting edges for boolean operations properly yet. The current algorithm (in KisIntersectionFinder::resubstituteCurves()) is able to produce valid results for some shapes, for union, intersection, and difference operation. Apart from the basic shapes, it also works for all of the tools (freehand curves, Bezier tool). 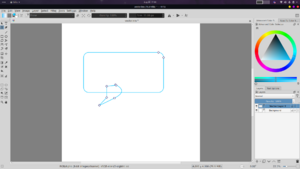 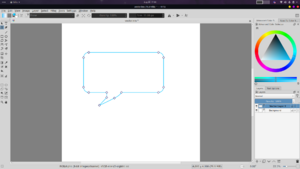 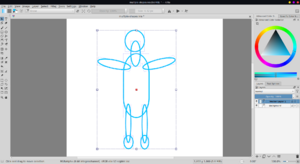 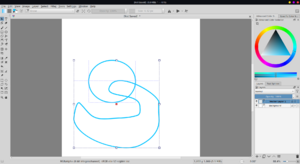 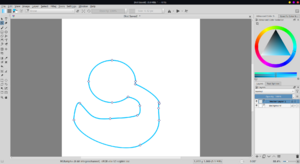 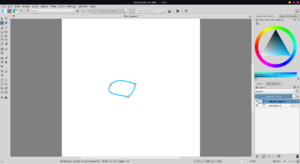 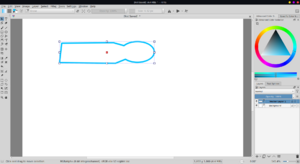 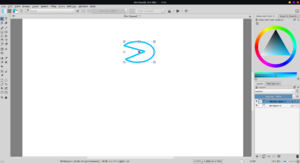 However, it has bugs. It is not perfectly commutative. One order of selection will produce incorrect results, but a different order will produce the correct results. This could lead to missing edges or some extra lines. There are some issues while clipping curves with polygons drawn using polyline tool. However, as these issues do not occur with rectangle tool, these are most certainly bugs. 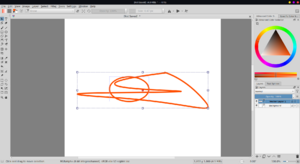 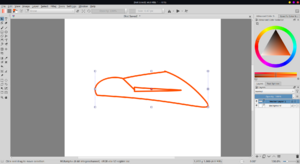 But, if we re-select the shapes in a different order, the clipping works as expected. 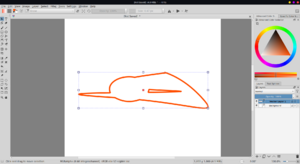 However, as most of the operations do work one way or the other, I guess the algorithm is sound. With some extra time and effort it will produce the correct results. However, given more time, one of the two aforementioned approaches will be a better fit for our purposes as they tend to be cleaner without so many conditions and need for treating the special cases differently.

Although I tried my best to finish it, and managed to get a working demo, the project still is not fully complete. Everything uptill clipping has been done. The only part remaining is to either debug the current resubstitution algorithm and iron out the remaining kinks, or to implement a new cleaner way to select the edges for the final shape. This can be achieved by any of the two above approaches.


Since I spent a lot of time trying to understand each approach, I have got a pretty good idea of how to implement it using any of the two methods. I will keep on working on this project, but am writing this down for easy reference.

I'm currently trying to debug on the clipping algorithm, and write better documentation and improve the coding style. The project runs, and can perform the required operations for many cases. However it is still buggy, and needs some more work. This project has been an extremely awesome experience, and I learned a lot. Due to the lack of prior implemented softwares doing the task, I had to implement stuff to know if it would work or not. It took more time than I had initially anticipated. I have tried my best to document my design choices and my decisions to make it easy for anyone to understand it and the nature of the task. I will try my best to finish the project by implementing a more stable way to handle the boolean operation selection, and would absolutely love to keep on working afterwards with Krita as well.


This page was last edited on 22 August 2021, at 12:54. Content is available under Creative Commons License SA 4.0 unless otherwise noted.