A storyboard is a graphic organizer that consists of illustrations and comments displayed in sequence for the purpose of pre-visualizing and planning of motion picture and animation. The project was to implement a docker in Krita that would use the existing animation API in Krita to facilitate storyboarding. Qt's MVC classes are used for storing and displaying the storyboard.

The requirements of the project can be broken down into the following goals:

The mockups prepared for the project:

This project uses Qt's MVC framework. There are three classes in this framework, model, view and delegate. The model class is an interface for the data, and is used to change and access the data. The delegate class draws the data in the view and lets users edit the data. The view class shows the data as drawn by the delegate. There are two models in this project, a CommentModel and a StoryboardModel. There are respective view and delegates for those models. StoryboardModel's data consists of a list of StoryboardItems. The CommentModel controls the number of comment fields in each StoryboardItem of the StoryboardModel's data. The models are connected using QSignals.

An image is stored as a KisImage object in Krita. It has multiple KisNodes. Each KisNode has a KisPaintDevice which contains a KisKeyframeChannel(depending on whether the KisNode is animated or not). These KisKeyframeChannels manage the keyframes in Krita.

Each KisImage has a KisImageAnimationInterface, which provides an interface for the animation related things of the image, such as framerate or the current time of animation the image is at.

Implementing the MVC classes for the docker

I started a few weeks early, to cover up for any unprecedented events due to ongoing COVID-19 crisis. This week I added the storyboard docker to Krita's plugin system and implemented the tool-buttons at the top of the docker and the menu related to those buttons. I implemented the CommentModel class to manage the comment tool-button's menu. The members of this menu would be part of the storyboard items that would be part of the storyboard model. I also started implementing the StoryboardModel class. (Commits :1)

I implemented the view (Commit: 9) and delegate (Commits: 8 10 11) classes for the StoryboardModel and debugged StoryboardModel(Commit: 7). The StoryboardView class inherits QListView because it has some useful functions, such as setFlow(...) and setWrap(...), that made implementing View and Modes very easy.

I implemented the interactions between CommentModel and StoryboardModel (Commits : 12 13 14). The interactions are set up so that any comments added to the CommentModel would add rows to each of the items in the StoryboardModel. Similarly with removing or renaming comments. I also implemented the visibility icon's functionality(Commit: 15). The StoryboardDelegate draws the comment only if its visibility is toggled on in the comment menu. Other than that I implemented the three modes row, column, grid. These modes change the layout of the items in the docker.(Commits: 16 17)

I implemented views that decide the part of Storyboard Item visible (Commit: 18). There are 3 views Thumbnail only, Comments only and Both. I also implemented drag and drop of Storyboard items (Commit: 19). For this I implemented the mimeData and dropMimeData functions and then called the moveRows function in the dropMimeData function to move the rows. I added the right-click menu (Commit: 22) and made the thumbnail's add and delete button functional (Commits: 20 23). I modified the unit-tests for the recent changes and ran them successfully (Commits: 24). Other than that I fixed some bugs and made some small changes. (Commits: 21 25 26 27 28)

Integrating relevant parts of Krita with the storyboard docker

I added the remaining unit-tests for interactions between timeline and storyboard docker (Commit: 41) and changed filenames according to conventions used in Krita (Commit: 42). Other than that I changed update of thumbnails to occur only when the image is idle, which would improve performance when drawing on canvas (Commit: 43) and added some functions for handling rendering of all frames.(Commit: 44)

I implemented the saving and loading of storyboards. For this I stored a QVector of Comment and a StoryboardItemList in KisDocument. This version of data is kept in sync with the version that is inside CommentModel and StoryboardModel.(Commits: 57 58 59 62)

I also added unit-tests for saving and loading of storyboards. These tests were added in kis_kra_saver_test.cpp. (Commit: 56)

I worked on the Export dialog GUI and implemented some of its functions.(Commits: 63 64)

I completed implementing the Export dialog's UI. I added some more options to the Export dialog such as Page Orientation and Font Size (Commit: 74). I completed both the custom (Commits: 67 76) and SVG layout (Commit: 77) specification parts. These are the two options to specify layout for the exported document. I implemented exporting to PDF (Commits: 69 75) and SVG (Commit: 78) documents. I made some changes based on feedback from Eoin O'Neil(Commits: 70 71 72 73 76 ). Other than that I fixed some small bugs. (Commits: 68 79 80) 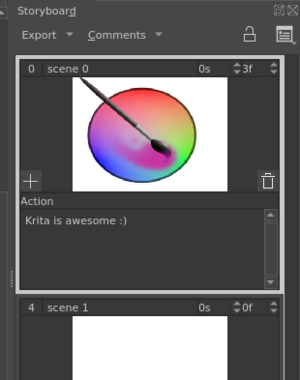 The code is not merged due to some bugs and crashes that need to be fixed.

Things to be done


This page was last edited on 28 August 2020, at 17:29. Content is available under Creative Commons License SA 4.0 unless otherwise noted.