The goal of this project is to improve graph visualization in Rocs, providing graph layout algorithms capable of drawing graphs automatically. This will enable users to explore graphs and graph algorithms more easily, improving their experience.

I created a tool to apply layout algorithms to graphs in Rocs, named graph-layout plugin. It allows the user to select an algorithm and apply it to a graph. Algorithm specific parameters can also be selected. In total, three algorithms were implemented: Force-Based Layout, Radial Tree Layout and Layered DAG Layout.

Documentation is provided both in the source code level and in the application level. In the source code, the public interface of the class that generates the layouts is documented in details. Other parts of the code also include comments describing each function and some implementation decisions. In the application level, a description of how to use each one of the available layout algorithms is provided.

The Force-Based Layout algorithm was implemented in the first phase of the project. It is the simplest and the most general algorithm from the ones considered in this project. It can be applied to any graph, but no guarantees are given about the resulting layout. In practice, it can generate reasonable results for some graphs.

A screenshot of the corresponding tab in the graph-layout plugin user interface follows, as well as some example layouts generated by the Force-Based Layout algorithm. 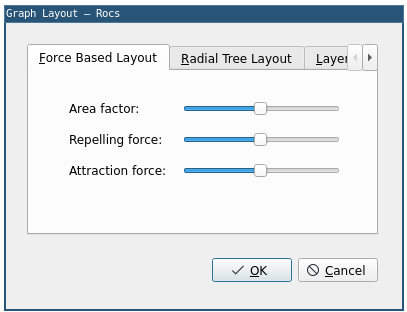 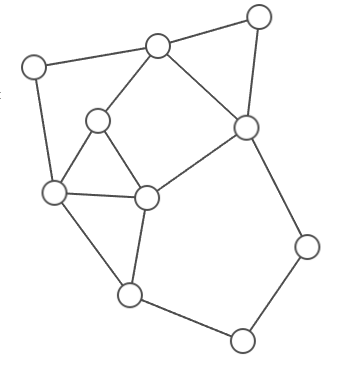 The Radial Tree Layout algorithm was implemented during the second phase of the project. It deals only with trees. Because of the restricted input graphs, this algorithm provides some desirable guarantees.

A screenshot of the corresponding tab in the graph-layout plugin user interface follows, as well as some example layouts generated by the Radial Tree Layout algorithm. 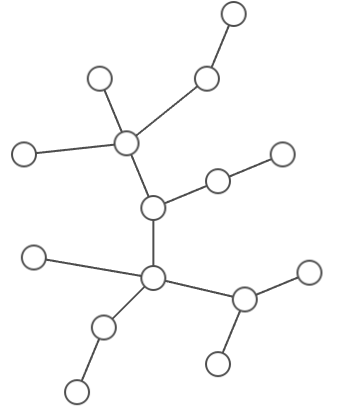 A screenshot of the corresponding tab in the graph-layout plugin user interface follows, as well as some example layouts generated by the Layered DAG Layout algorithm. 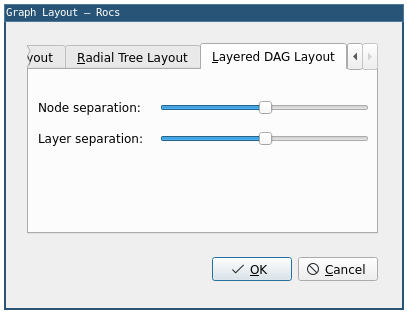 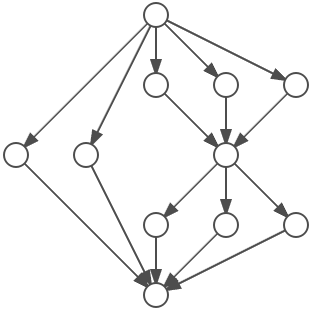 The Quality Benchmark is a set of non-functional tests created to evaluate the performance of the graph layout algorithms in Rocs with respect to objective aesthetic metrics. This evaluation occurs in three phases: graph generation, layout computation and layout evaluation. In the graph generation phase, a set of graphs are generated at random from a predefined probability distribution. In the layout computation phase, one of the Rocs graph layout algorithms is applied to the graphs generated in the previous phase. Finally, in the layout evaluation phases, objective aesthetic metrics are computed for each one of the layouts generated in the previous phase. A simple text report is generated containing the minimum, maximum and average of each metric.

The Quality Benchmark can also help to identify where future efforts will be better placed. For instance, it showed that the Force-Based Layout algorithm can generate edge crosses even when applied to trees, which justifies the implementation of the Radial Tree Layout algorithm.

All my commits can the found in the following merge requests.

My blog can be found here. The links to posts related to this project are given below:

I really enjoyed working on this project. Most of my experience writing software is related to research, competitive programming or course projects. This project was a great opportunity for me to work in something different and get more experience working in a code base I did not create, with tools I did not choose. I learned a lot about Qt, which is used a lot in Rocs.

The open source world is something new for me. I already knew and used a lot of open source software, but I never contributed before deciding to apply to GSoC. The efforts of open source communities such as KDE are able to produce great results and it feels nice to become part of something so amazing.

I had to learn about graph layout algorithms to implement this project. I always have fun when I learn new algorithms. This time was not different. Two of the three layout algorithms I implemented are completely heuristic. The only way to get an intuition about the results that they can achieve is by experimentation. Although I love when there is a mathematical proof that the result of an algorithm is good, there are many important situations in which the best thing that can be done is to write a heuristic solution and test it a lot. This is why I value the experience I had working on them.


This page was last edited on 30 August 2020, at 15:40. Content is available under Creative Commons License SA 4.0 unless otherwise noted.