digiKam is KDE desktop application for photos management. For a long time, digiKam team has put a lot of efforts to develop face engine, a feature allowing to scan user photos and suggest face tags automatically basing on pre-tagged faces by users. However, that functionality is currently deactivated in digiKam, as it is slow while not adequately accurate. Thus, this project aims to improve the performance and accuracy of facial recognition in digiKam by exploiting state-of-the-art neural network models in AI and machine learning, combining with highly-optimized OpenCV DNN module.

Generally, I familiarized myself with current Deep Learning (DL) based approach for face recognition in digiKam and picked up the work of Yingjie Liu (digiKam GSoC 2017). His proposal, blog posts and status report led me to FaceNet paper and OpenFace - an opensource implementation of neural network (NN) model inspired by FaceNet paper. They seemed very potential to my work. In addition, Liu also implemented unit tests on his DL implementation and their results (benchmark and accuracy), which can be used as a reference for my work later.

For the rest of the bonding period, I focused on reading carefully FaceNet paper and also looking for other promising NN models to implement when coding period begins. Besides, I also prepared unit tests for face recognition, basing on current test programs and Liu's work.

My plan for next 2 weeks of coding period is to:

For this phase, my work mostly concentrated on building the "first and dirty" but working prototype of face recognition with OpenCV DNN. In addition, throughout that very first draft, points that need to be improved were revealed, so as to build a better and faster face recognition module.

OpenFace model is chosen since it is appropriate for application like digiKam. OpenFace is a pretrained based on FaceNet paper, taking a cropped, aligned face as input and resulting a 128-D vector representing that face. The vector can be used later to compute similarity to pretagged faces, or clustered into groups of similar faces. For photo management software as digiKam, user has an "open" face database, where an unlimited number of faces and people can be added. Therefore, the face recognition should be flexible enough for extension, while having a decent accuracy. However, false positives are not so critical, since they can be always corrected by user. From all of the reason above, OpenFace is a good choice.

Liu's implementation is based on a version of OpenFace pretrained model, customized for compatibility with Dlib. It achieves an astonishing accuracy on orl database with above 98% of accuracy for tag prediction on faces with only 20% of pretagged images. However, its drawback is the performance. Face recognition on 112x92 images took on average 8s for a face. In case that the image is bigger, performance is worse.

My attempt on a new implementation with OpenCV DNN has shown great potential. While not being able to reach the accuracy of Liu's work, it runs much faster. For my first draft, the processing time for each image is only about 1.3s, while an accuracy of above 80% for 20% of pretagged images was achieved.

Indeed, talking about the potential of the implementation with OpenCV DNN, I was able to identify the points whose solution is going to improve:

(All tests were conducted on orl database)
TODO

Following the analysis result reported for the last 2 weeks, I modified the implementation in a way that all data files needed for recognition are loaded at the launching time (in constructors), which saves a lot of time. It shows an increase of 10x in speed, since it turns out that loading data takes 90% of processing time.

For accuracy improvement, cosine similarity was implemented. It's obvious that those 128-D vectors are not normalized, so cosine distance works better than euclidean distance. Besides, I wrote python scripts to test new face detection approach with SSD-MobileNet NN model and OpenCV DNN. It shown a possible accuracy of above 96% for 20% pretagged images, which is extremely promising.

Since new implementation of face recognition has achieved some promising results, I intend to concentrate on optimization for the next coding phases:

From the results and analysis of the last phase, I mostly concentrated on factoring codes of face recognition for this phase. This allowed for an abstraction layer where more NN models can be implemented while sharing a common interface. This gives places for flexibility and extension for later development on face recognition. In addition, I also accomplish a working version for face detection with OpenCV DNN and SSD-MobileNet, which outperforms current face detection. 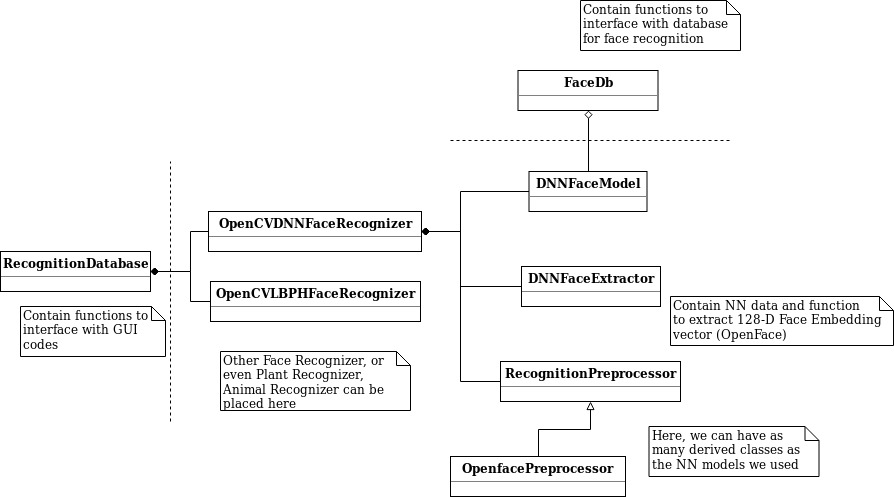 Besides, I delete the old codes of Liu using dlib, since after restructuring the codes, there are no places using dlib codes anymore. This is indeed a goal of my GSoC project this year, because this reduces efforts for maintenance, as well as eliminates dlib dependencies, compiler warning and complicated rules for compiler when compiling dlib.

At the moment of publishing, SSD (Single Shot Multibox Detector) is the state-of-the-art (SOTA) algorithm for single shot face detection, while achieved comparable results with Fast R-CNN (current SOTA algorithm) and a real-time performance at over 30 fps on CPU. SSD-MobileNet for OpenCV DNN is a pretrained model based on SSD and MobileNet architecture and can be found in the corresponding github folder of OpenCV. The customized pretrained model is lightweight and specially fits for OpenCV DNN.

New face detection with OpenCV DNN and SSD-MobileNet got a very good result. While running a little bit slower than OpenCV Haar face detector, it maintains real-time detection at around 30 fps running on CPU. On orl test set, OpenCV DNN face detector outperforms OpenCV Haar with 100% faces detected in comparing with around 90% in case of OpenCV Haar. It can also detect face in photos with complicated light condition, shadow or non-frontal faces. The bounding boxes generated are also better, since they are at various shapes and exactly fit to detected faces. A comparison of OpenCV DNN with OpenCV Haar can be found below:

Despite having a very good performance and accuracy, OpenCV DNN face detector seems to work not well with rectangle photos, where the width / height ratio is far from 1.0 (i.e. square). Actually, faces are not detected or detected at the wrong places. Therefore, OpenCV DNN implementation must be studied more.

Besides, for the last phase of GSoC, I will concentrate my work on face recognition improvement and face clustering.

For this last phase of GSoC, I dedicated my work on optimizing the face detection and face recognition, while finishing my last TODOs on face clustering.

Basing on my observation (i.e. face detection did not work well on rectangle image with w:h ratio much smaller or much bigger than 1.0), I found a way to improve significantly the accuracy of face detection. The idea is to resize the image while keeping its aspect ratio (in a way such that the resizing proportion is as least as possible), then pad the image so that it becomes square and reaches the required dimension. Since faces in the image are only bigger but not deformed, they are easily detected.

Even though it runs 10 times slower (i.e. 400 - 800ms for each image), it detects faces much more accurately. From my point of view, bounding boxes detected for faces (by face detection) take a significant amount of time if users want to modify them. Therefore, an accurate face detection algorithm should be preferred over a fast one. That's why I set YOLOv3 as default NN model to use for face detection over SSD-MobileNet.

Back to face recognition, I attempted to implement face clustering. The ideas is to cluster unknown faces into groups, helping user to tag faces more easily. However, k-means implementation requires the number of clusters in advance, which is absurd in our case as we needs to cluster first to know how many clusters there are. As a result, better clustering algorithms should be studied later, as well as optimization on face recognition.

Face recognition optimization on distance measurement between a face and a group of faces has been abandoned for more than a month. Focusing on that for this week, I finally implemented the distance measurement as the average of distance to all the faces in the group. It is expected that face prediction will be now more robust.

Density-Based Spatial Clustering of Applications with Noise (DBSCAN) was implemented for face clustering. It was selected since it does not require the number of clusters like k-means. However, an eps value (determining how we can consider 2 faces as being similar) and minPts (for minimum faces per cluster) should be given as parameter of the algorithm. The algorithm works quite well, but extremely sensitive to eps value. Indeed, human faces are quite similar one to another, so the "noise" is strong, and DBSCAN is not quite good in that situation.

There are still many things to improve on digiKam face recognition performance and the accuracy of face clustering, as well as on the code base side. From my point of view, those improvements should be:


This page was last edited on 4 September 2019, at 07:46. Content is available under Creative Commons License SA 4.0 unless otherwise noted.
-->