What Are Dynamic Playlists?

Dynamic Playlists are self-generating playlists, created according to defined rules, which are used to keep the current playlist to a manageable size. While amaroK is fairly light on resources while running, loading a large number of tracks into a playlist at once increases RAM usage, possibly impacting on system performance, which is avoided completely by using Dynamic Playlists. Also known as "Party Mode", they are also a great way to keep the music playing all night with no interaction.

You can find the Dynamic Playlists in amaroK's Playlists sidebar. 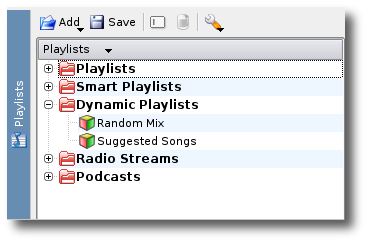 There are three types of Dynamic Playlists, two of which are predefined. (more details on configuring this later)

How Do I Use Dynamic Playlists?

Simply double-click your desired playlist, drag it to the playlist window, or right-click and select Load. This will replace your current playlist, so you may want to save that first if it's important to you. (pointer to 'save playlist' docs) Both Random Mix and Playlist Shuffle will populate your playlist and allow you to start playing immediately. Suggested Songs will start with an empty playlist, requiring you to add at least one song from your collection manually. The suggestions are added on a track change, so your playlist will not be populated until the end of the first song.

Changing the Behaviour of a Dynamic Playlist

Right-clicking on a dynamic playlist will allow you to select Edit, which opens a dialogue box. 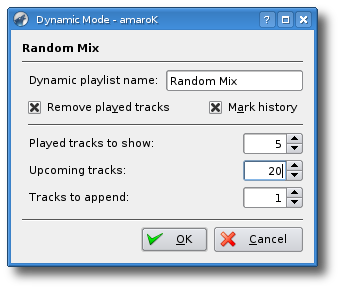 Note you can also access this dialogue via the Edit this Dynamic Mode button at the top right of your playlist window. Note, these buttons will not appear if you have Dynamic Mode disabled.

The Repopulate button will clear the current playlist and refill it. Note if you're using Suggested Songs, this will clear the playlist, and you'll need to add a track to kick-start it again.

The settings on the right are as described in the previous section. In the panel on the left, you can select from any of the existing playlists and smart playlists on your system. If you select multiple playlists, amaroK will add random tracks from each of these.


This page was last edited on 1 January 2013, at 00:45. Content is available under Creative Commons License SA 4.0 unless otherwise noted.