The 2011 Promo Team sprint is from 6-8 May 2011 in Southampton. We are fortunate to be sponsored by the School of Electronics and Computer Science, University of Southampton as hosting partner for this sprint.

This page tracks organisation, tasks to be done at the sprint and provides information for attendees.

Your accommodation is being booked. If you have not already done so, book your travel now.

You may need to arrange your own accommodation. Contact Stuart Jarvis to check.

The following people are unable to attend in person, but may be able to participate via IRC, instant messaging, Skype etc.

Note, this is a public page. If you're not comfortable putting contact info here, please mail Stuart Jarvis instead.

There are a few options. Trains are normally your best bet.

Total journey time to Southampton station is about 2 hours, maybe a bit more if you have to wait for the train at Waterloo.

You can also check buses to see if there is one at a good time for you (direct and a bit cheaper).

From Heathrow you can take either:

Tube map (PDF) to make some sense of that. Heathrow is in square 1E; Paddington 3C; Piccadilly Circus and Waterloo both in 5D

The tube is massively cheaper and recommended.

Get from London to Southampton

Train from London Waterloo to Southampton Airport Parkway (or Southampton Central, both are on the same bus route, but Airport Parkway probably makes more sense if you come to/from the university directly). The trains go about every 30 minutes, normally the destination is 'Weymouth' on the departure boards in the station, but they also list the stops.

Heathrow express is £32 return, you can book online. You can also buy on the day from a machine at the airport station. The Underground part for that will cost you £4 each way.

Or if you go the whole way on the tube, it will cost £5 each way and take about 10 minutes longer. Take the tube.

Tube tickets you just buy from machines or office at the stations. Tube and Heathrow Express will be signposted in the airport (or ask).

For the train to Southampton, I normally use thetrainline.com - normally you can select to pick up the tickets from a machine in the station (it should be cheaper to buy in advance). When you enter your journey times on thetrainline.com you want 'Offpeak return' if available. Outward ticket is valid all day after 10am on the day you specify and the return is valid on any train during the following month, after 10am. If you travel is before 10am either way you'll need an 'anytime return' which will be about double the cost.

This is easy. Just visit thetrainline.com and get a ticket from Gatwick to Southampton Central.

When you enter your journey times on thetrainline.com you want 'Offpeak return' if available. Outward ticket is valid all day after 10am on the day you specify and the return is valid on any train during the following month, after 10am. If you travel is before 10am either way you'll need an 'anytime return' which will be about double the cost. Off peak seems to be around £44.80 at present. Singles are also available and may be cheaper, but these are tied to specific trains, so if your flight gets delayed you are basically screwed.

Typically, you will need to change trains once, occasionally two times, on the journey. Occasionally there are direct trains.

The university operates a decent bus service, uni-link. The bus you want depends on your entry point:

The stops you need are:

Accommodation from the bus stops 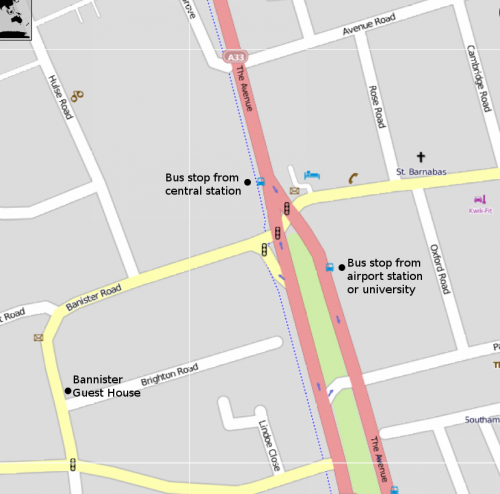 We are hosted by ECS. The University of Southampton Campus Map shows the ECS building (number 53) to the top left and also the uni-link interchange where you should get off the bus.

The University of Southampton department of Engineering and Computer Science can offer us rooms, WiFi access and free lunches. They would also to hold a joint event including a presentation to students about KDE, probably on the Friday at some point.

More info on Southampton as a city is on Wikipedia.

Bannister Guest House. If you are in the 'confirmed' group above then your accommodation has been booked for you for the nights indicated.

Accommodation is in single ensuite rooms and breakfast is included.

We need to make arrangements for people arriving after 2100, which may be for those of use arriving earlier to pick up your keys.

Those arriving on Saturday should probably come straight to the university, then we can all head as a group to the accommodation.

Please feel free to add here. Sticking your name after the suggestion makes it easier in case we need to clarify what is meant :-)

very little has happened on the KDE side so far)

(or whatever you prefer), hang out

This is no longer relevant - relevant info migrated above.


This page was last edited on 18 May 2011, at 16:37. Content is available under Creative Commons License SA 4.0 unless otherwise noted.