Akonadi is complex, under-the-hood, and does not seem to have immediate benefits - this page can help communicate to end-users what Akonadi is good for. We recommend reading through the entire page.

Akonadi is a framework that can understand and manipulate email, calendaring and contact information, or PIM (Personal Information Management) data, from different sources.

What can Akonadi do right now?

In short, not much. KDE PIM 4.4 is still in its infancy stage as far as harnessing Akonadi's power is concerned. Unfortunately the benefits of Akonadi will only be seen when more applications start using it. Luckily developers are well aware of this and applications, such as KDE PIM 4.5, are in due course to providing these benefits.

However at this point in time, Akonadi can:

Advantages Akonadi will provide in the future

For example, applications like KOffice can’t access data from KDE PIM apps right now unless they are running. Akonadi runs as a background service so it’s data is always available. For example, you can have a docker in KOffice which attaches the current document to a new calendar event (currently in development). You can invoice app sending mails by itself instead of having to even start KMail. We could drag and drop groupware data streams to your Plasma Desktop and have them easily accessible there, live updating once something happens. Think email threads, chat logs, shared notes etc. The possibilities are endless. 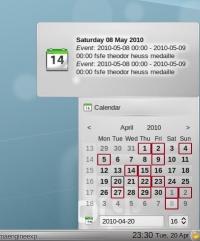 The Migration towards an Akonadi based PIM Suite

The next big thing in terms of showcasing the benefits of Akonadi lies in the upcoming KDE PIM 4.5. This new version of Kontact is undergoing massive infrastructural changes. It is currently largely stable and feature-complete, and is assumed to be safe for standard usage. Even though data loss is highly unlikely and the remaining problems should only lie with weird and legacy setups, the KDE PIM team realises the risk of compatibility issues and is placing a large focus on the stability of the upcoming release. This will be done by releasing monthly betas - discouraged for the general public with vital data but necessary to ensure a stable final release.

During this migration period, the KDE PIM team would ensure that all possible migration scenarios are covered, as well as ensuring that rolling back to a traditional non-Akonadi Kontact (ie, PIM 4.4) is possible. Migration to and from Akonadi and non-Akonadi based PIM suites will be automated and with minimal data loss (at most, meta data such as flags will be lost). For extra security, it is recommended for testers to backup the $KDEHOME directory (usually ~/.kde). Obviously any and all bug reports should be reported.

The following groupware servers can be expected to work with Akonadi-based Kontact components:


This page was last edited on 5 March 2012, at 23:31. Content is available under Creative Commons License SA 4.0 unless otherwise noted.