Contextual menus are menus called by user interaction that provide a set of commands related to the context of where the interaction takes place within the interface object. They offer only items that are applicable or relevant to the object or region at the location of the focus or the pointer.

The appearance of contextual menus is similar to that of drop-down menus, including the display of accelerator keys and keyboard shortcuts, but they do not have a menu title.

A contextual menu appears when the user right-clicks an object, or focuses the object and presses Shift+F10. 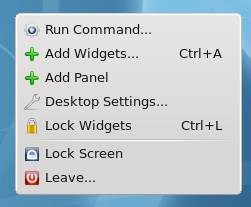