The KDE project started on October 14th 1996 (and the project has thus celebrated its tenth birthday already) with a call for programmers in comp.os.linux.misc: the original announcement of the KDE Project in 1996 (use Google™ Groups to find the original posting).

At the 2003 Kastle conference Matthias Kalle Dalheimer gave a presentation about the history of the KDE project.

There have been roughly yearly large-scale developer meetings for the KDE community since very early in the project. Since the KDE e.V. was created the yearly meeting is a requirement of its bylaws, so we can count on it now.

The KDE Appreciation Awards, also known as the "aKademy Awards", are awards that the KDE community gives to KDE contributors. Their purpose is to recognize outstanding contribution to KDE. They are given in a yearly basis inside the yearly aKademy conference. There are three awards, best application, best contribution to KDE and the Jury's Choice Award. 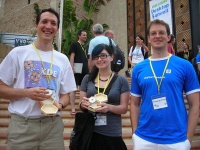 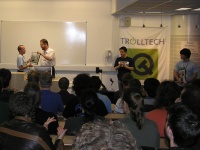 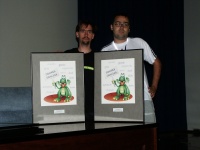 
This page was last edited on 7 February 2010, at 15:02. Content is available under Creative Commons License SA 4.0 unless otherwise noted.