Difference between revisions of "GSoC/2019/StatusReports/Albertoefg"

Write a parasite class to hold the index

Write a Helper Pipe class to populate the KisVectorAnimatedBrush

Change brush tip with every dab

During this period of the Google Summer of Code I tried to contribute to Krita in different ways, including helping users on IRC and Reddit, and also improving the Krita documentation.

The biggest amount of work I did was to contribute with the Selections Tools section of the manual, as suggested by Wolthera van Hövell. This helped me to understand better how to write documentation, how to use git and gitlab, and how to work with an Open Source project. My work was merged right before the Google Summer of Code started. Link to the closed merge request

During this period I wrote the documentation for my brush. I don't have experience with writing real world software, but I've read it is always a good idea to start writing the end user documentation, this way there is a clear path on what to achieve at the end of the project.

I also read the specification on Scalable Vector Graphics (SVG) 1.1, because I wanted to know as much as I could about the <symbol> and <use> elements. Upon reading this with more detail, I realized it would be a bad idea to use <symbol> for this type of brushes.

This is because ‘symbol’ elements are never rendered directly; their only usage is as something that can be referenced using the ‘use’ element. Using a <symbol> would imply that the users have a broken workflow when it comes to editing the brush tips, because they won't be able to edit the brush in the Krita canvas, as the canvas should not show <symbol> elements only <use> elements. And changing this behavior would be against the SVG specification.

During this period I worked on implementing the base class for my brush and to have the basic functionality, this includes: Opening an AVB with the +import tab, parse the XML from the SVG to be a QList of KoShapes, adding the mimetype of .avb to Krita; during this period I didn't have much trouble with Object Oriented Programming as the majority of the work was using functions and implementing the simple things, not touching classes much.

This was a harder time, I started to work with classes and to implement the index that will change with every dab, changing the images accordingly. This was the first time I really had to understand the way OOP, and C++ works, it wasn't an easy time for me. I tried to implement a class that inherited from KisBrushesPipe, however I was not successful, but I had some small achievements, I started to understand how a brush pipe should work on Krita, what basic functionality I needed and how to achieve this. During this period my mentor started to work with me closer, to make sure I understood everything and were not completely lost.

This was a period of darkness, although my mentor was really helpful and patient with me. I started to read more of the Krita codebase, specially to look at how KisBrushesPipe and KisImagePipeBrush work, it was really hard, a lot of the functionality was not obvious to me and there was no easy way to understand it.

My mentor guided me by telling me to work on a single class and not look at those classes for the moment, that way I could start to improve my brush in a simple way, this was a good advice. I stopped trying to implement those things and slowly worked on built a more humble thing. Here is a point where I did my biggest mistake, I didn't write tests. I was feeling really confused and had a lot of new things to understand and work with, and the unit tests only added to the complexity, so I tried to focus on learning more about the work I was doing before adding another layer of complexity to my code.

Finally out of the darkness. During this period thanks to the help of my mentor I started to work slowly to improve my brush, to understand more and more of the code of Krita and to implement more functionality.

Unfortunately this wasn't all a victory, I did a huge amount of progress and this two weeks were probably the ones were I learned the most about programming, but I also didn't produce as good code as I wish I could, there were was a lot of code I needed to clean, I still needed to write unit testing and have lots of things to improve. But overall I am quite proud of how much I learned and improved.

Overall the whole I am proud of all the learning and work I did. It has been one of the greatest experiences to learn and collaborate with such an amazing project as Krita, to meet all the team during the Krita Sprint and to realize how much more I can do to help.

I still have a lot to improve my project. Fortunately the end of the Google Summer of Code does not mean the end of my collaboration with Krita, which I hope will last for years to come and I feel proud to be a member of this community.

I have to admit my project is not yet ready to be part of Krita. There are still things to do, it is necessary to clean the code, to add more comments, and to add more tests. But thanks to the progress of the last few weeks I am confident it won't be that long before my brush can become part of Krita.

Talking to my mentor and some other Krita developers, I was suggested to read more programming books, one of them being "Design Patterns: Elements of Reusable Object-Oriented Software". I plan to read this book to learn more and be able to produce better code for Krita.

I was also suggested by Tiar to start writing and small program that would reset the configuration of Krita, to help non-technical users, as suggested by this phabricator task.

Of course I want to keep improving my brush to take it to the next level, adding new features and options that were beyond the scope of the Google Summer of Code period and my coding abilities. 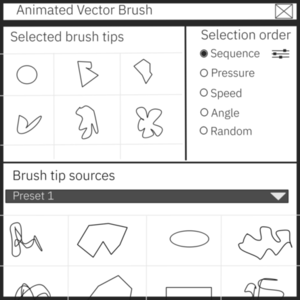 
This page was last edited on 26 August 2019, at 03:11. Content is available under Creative Commons License SA 4.0 unless otherwise noted.