We Amarok developers try our best to make Amarok the most awesome player ever. However sometimes there is a feature that we haven't implemented, either because we haven't gotten to it yet or because it wouldn't make sense for everyone. But have no fear! With Amarok 2.0's powerful QtScript framework you have access to nearly the entire Qt API: the same framework Amarok developers used to write Amarok itself. The possibilities are limited only by your imagination and your knowledge of Qt and JavaScript. We can't do anything about the former, but we'll try to help you out with the latter here. :)

Just a warning at the start: the layout of the sql tables is not guaranteed, so writing data into the SqlDatabase yourself is strongly discouraged. We are buffering a lot of stuff, so while Amarok is running you are virtually guaranteed to produce inconsistent states. Also some values in the database can make Amarok crash, e.g. a track without an album.

A DBus interface is also provided for interfacing with Amarok from external applications or plasmoids.

The DBus Interface for External Applications

DBus is a inter-process communication framework; so it really has the same purpose as DCOP. However the DBus interface in Amarok 2 has only a small subset of the power of the DCOP interface in Amarok 1.4: in the case of Amarok the true successor of DCOP is QtScript (see next section).

The collection can be queried using an XML syntax. The following, for example, will return the first 10 items in the collections:

Amarok 2 provides access to a set of Amarok-specific objects and the Qt API via JavaScript.

Amarok scripts are written in the language JavaScript 1.5 using the QtScript engine. If you are familiar with JavaScript from web developing you are in good shape, but its important to note that web browser specific extensions like DOM and some functions are not available.

A good resource for JavaScript is (not surprisingly) provided by the Mozilla community.

There are also many other JavaScript guides and tutorials on the Internet. Though often web-browser oriented, many are still relevant.

Qt is the C++ GUI toolkit and library used by Amarok and KDE. Using the same technology behind the Qt Java bindings QtJambi, Amarok provides JavaScript bindings to most of the Qt API. This allows you to create widgets and windows, use advanced XML parsing methods, create animations, browse the web, open a TCP port and much more.

If your writing an Amarok script, there's a good chance you mostly want to manipulate and query Amarok. There are objects available to every Amarok script that do just that; they are documented on our Script APIs.

Some scripts play a special role within Amarok: their role is defined in their .spec file. They all have access to all of the Qt and Amarok objects. 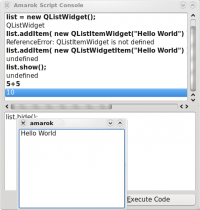 Amarok is bundled with the Amarok Script Console; its a script itself and can be started from the script manager. You can use it for testing out snippets of code and manipulating JavaScript, Qt and Amarok objects.

Simply enter 1 or more lines of code and press CTRL-enter. It shows the result of the final line or any exceptions that occur. Note that if you use the 'var' keyword, you won't be able to access that variable in subsequent entries.

If you are writing a lyrics script, there are a few things to keep in mind. First of all, the way that lyric scripts get notified of requests for lyrics is they must connect to the AmarokLyricsScript::fetchLyrics signal, like so:

Make sure that your function has a signature of type:

If the url parameter is empty, then Amarok is requesting a lookup for a certain song. However, if the url is not empty, Amarok already has a url and it it wants the script to fetch the lyrics directly. This only happens when the user has chosen a certain lyric from a bunch of suggestions.

In order to send the downloaded lyrics back to Amarok, your script should call:

The parameter to this function has to be in following XML-format:

If your script wished to display rich-text lyrics, you can also call

This function expects an html page, and will not be parsed for artist/title. When there where no exact match, but some suggestions, use following format:

When there is no track found:

Note here that the URL that you supply for each suggested song is the same that is sent back to fetchLyrics. That is, if the URL argument to fetchLyrics is non-null, it is because a user chose one of your suggestions, and you know that it is one of the urls that you supplied. So usually the URL is non-null when the same lyric script is called a second time on the same song, once a suggestion has been chosen.

Scripts consist of a script.spec file and a main.js file. The main.js file is the script file thats loaded and executed.

Generally when your writing your script, you'll just edit the files directly. Amarok looks for scripts in the $KDEHOME/share/apps/amarok/scripts/yourscriptname/ directory. $KDEHOME is likely .kde, .kde4 or .amarok-nightly if you use Neon.

When your ready to distribute the script, just tar it up in a file.

The ".amarokscript.tar.gz" suffix is required. Be sure it has a sub-directory named for your script, the main.js, script.spec and any supporting files.

Script.spec provides some info to Amarok's Script Manager about your script. It's in the standard .desktop file format. A sample follows.

It's a copy of the radio_station_service but I changed all instances of 'cool' to 'crazy' so I could differentiate between them. In the code, name, version and category are the important parts.

All scripts have access to the Amarok Statusbar, OSD, playlist and collection. A sample main.js file that shows some of these features follows:

Scripts can also connect to signals emitted by Amarok. A simple script that displays the number of tracks in the playlist whenever a track is added or removed could be written like this:

If you use the Qt Bindings, you are legally obligated to release your script under the GPL v2 or v3 license, under the terms of Qt 4.8's Open Source licensing. At least, it seems likely this is the case, IANAL.


This page was last edited on 19 February 2014, at 12:43. Content is available under Creative Commons License SA 4.0 unless otherwise noted.